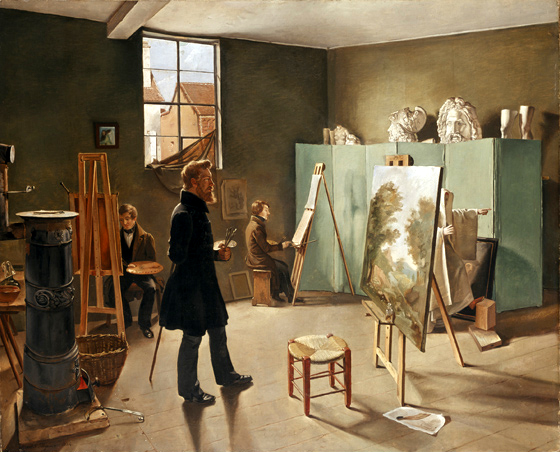 By "fine art" one understands artistic objects like pictures or sculptures; in other words, things that have been produced in the intention of nice esthetic.
They are also called "visual arts", maybe because if you call a work of art “fine art” it will not mean that only objects that we consider subjectively “beautiful” count as art and not the rest...
In addition to painting and sculpture, the art genres of the fine arts also include architecture, drawing, graphics, photography and handicrafts. All of these art movements count among the "fine arts", which have an effect on the viewer only through their spatial-physical structure, and generally do not need an interpreter to convey their message.
The first works of art may safely be credited to the Cro-Magnon man, who has immortalized himself on the walls of his living caves. He painted on the protruding rocks everything he saw and impressed him. One recognizes in the colored paintings that have survived the millennia, different animals and even whole hunting scenes.
Art existed before writing. For example, the ancient Egyptians developed their very special pictorial writing, the hieroglyphs, with which they conveyed important and noteworthy content to posterity. So if you wanted to tell a story that would stand the test of time, they used these many different portraits that they painted on papyrus or carved in stone.
The representations and works of art that have survived into our time mostly have to do with the worship of gods, the cult of the dead or the glorification of a pharaoh. What is less well known is that there was already something like graffiti or “scratches” back then. Archaeologists have found potsherds on ancient garbage dumps on which ordinary people such as traders, merchants or construction workers have immortalized themselves. Since paper was not a mass product at the time, pottery shards were used for short notes. Everything in picture script, of course. At the time, almost everyone seems to have been an artist, because anyone who wanted to write something down had to draw it or cut it in stone.
Later works of art such as the frescoes, paintings and sculptures of the Greeks and Romans are characterized by naturalistic depictions of gods, emperors but also everyday situations.
For a long time, the fine arts were determined by religion, church and secular authorities. Mostly they had a religious meaning and were commissioned by representatives of the church, rulers or wealthy citizens, whereby the artist had to adhere to strict conventions in the production and choice of motifs.
It was not until the middle of the 19th century, in the modern era, that the narrow-minded boundaries were broken, which were usually limited to only one style per epoch, and the visual artist was free to let his creativity run wild. And that's what he did. From the modern age, the art world was showered with new "isms". Impressionism, pointillism, expressionism, functionalism, cubism and much more emerged.
We owe these many different styles to artists like Claude Monet, Georges Seurat, Franz Marc and not to forget Pablo Picasso and Georges Braque, who introduced us to Cubism.
Today, paintings and sculptures rarely depict reality or they depict it from a completely new perspective, and in front of many a work of art the masses sometimes gather and talk hotly about what the artist was trying to tell us ...
Therefore, the visual arts today mostly serve an end in themselves and rarely has any special use ... but no restrictions either.

In the meantime it can be quite difficult to find your way in the tangle of the many different genres and styles of art.
And even with the countless artists who have immortalized themselves with their works over the centuries, only a drawer full of profiles and portraits helps in order not to lose track of everything.

To get a little order in the various forms of art, they have been divided into art genres. The basic genres of art related to the medium of expression are the fine arts, the performing arts, literature, and music. But the individual genera can also be subdivided again:

In the fine arts, the various genres of art are still relatively clear.
A distinction is made between: